Emvin Cremona Maltese painter b. Valletta 25 May 1919; d. 19 January 1987. He was the son of Giuseppe Cremona and Maria Assunta née Mizzi. He commenced his formal artistic training in1935 at the Malta Government School of Art and later studied at the Regia Accademia di Belle Arti in Rome, at the Slade School University College in London and at the Ècole Superieur des Beaux Arts in Paris. During World War II he served with the Royal Engineers. It was during this time in 1942 that he restored the murals depicting military themes extant at the Main Guard in Valletta. In1948 he married Lilian Gatt. From 1949 to 1959 he was master of painting at the Malta Government School of Art. In the sixties and seventies Cremona dominated Malta’s artistic scene. He was a master of design and a lucid draughtsman with strong compositional powers derivative of his understanding of Byzantine art that turned him into an extraordinary and highly successful interior decorator, and a virtuoso mural painter specialized in Sacred Art. Memorable are his large and complex decorative church mural cycles and altarpieces that admirably fulfil the essence of Christian teachings and aesthetics. Cremona was equally at ease in producing figurative and abstract works. His easel paintings are the product of a potent creative and disciplined mind that led him to experiment with a variety of textures, hues and media including unconventional materials such as broken glass. Whatever his chosen media or expressive idiom his art remained constant in its directness and power of synthesis conveyed through a harmony of pigments, textures and forms that enchant and surprise the beholder. In 1959 Cremona was entrusted with the decorations on the occasion of the 1960 centenary celebrations of St Paul’s Shipwreck in Malta. He was responsible for the design of all memorabilia, medals, posters, brochures and pamphlets. He also designed the set of commemorative stamps issued on that occasion by the Maltese postal authorities. The designs of these stamps proved to be so original and innovative that they set new international standards. From then onwards he was regularly commissioned to design a string of remarkable stamp issues, including the 1964 Independence issue and the ensuing Malta definitive issue, that established him as a top class stamp designer giving a high ranking to Maltese stamps in the world of philately. Cremona designed the Malta Pavilion for Expo’70 in Osaka, Japan. In 1968 he produced the splendid trophy which is annually awarded to the winning yacht of the prestigious Middle Sea Race. In 1961 he was created a Knight of the Pontifical Order of St Sylvester. In 1963 he was awarded the gold medal by the Malta Society of Arts, Manufactures and Commerce and another medal by the Confederation of Malta Civic Councils. His son Marco Cremona is also an accomplished painter.

This biography is from Ganado, Albert, Espinosa Rodriguez, Antonio, 2018 An Encyclopedia of Artists with a Malta Connection Malta: Fondazzjoni Patrimonju Malti, pp 186-187. 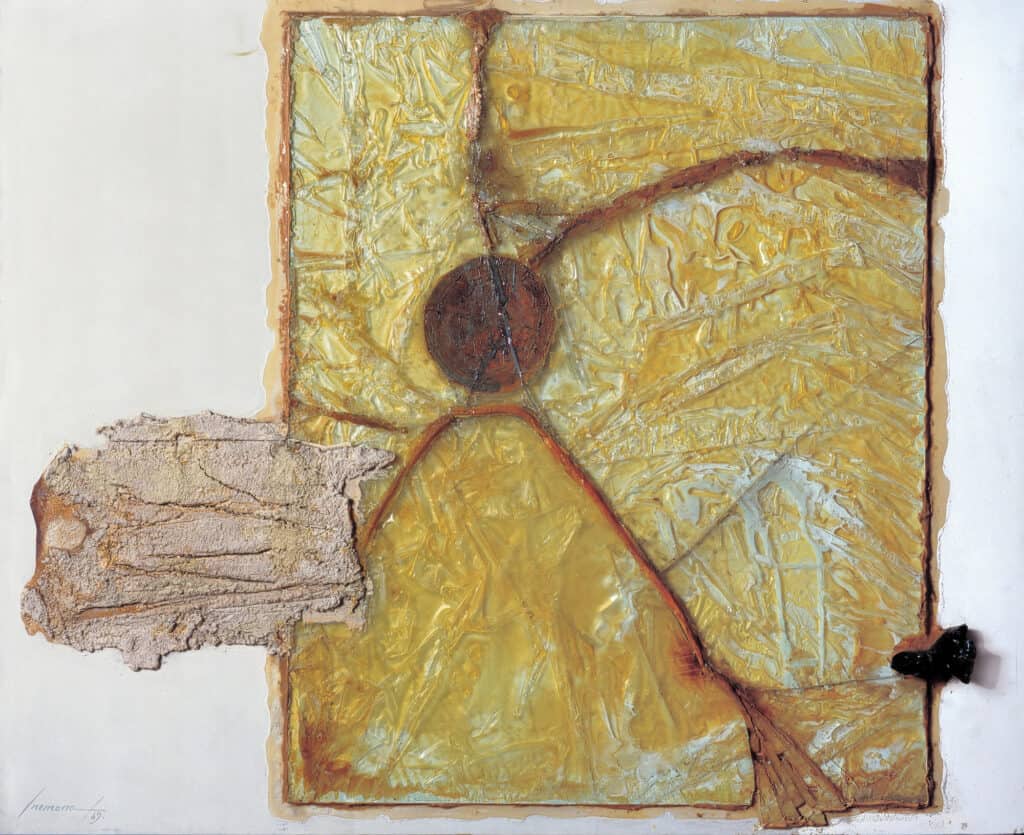 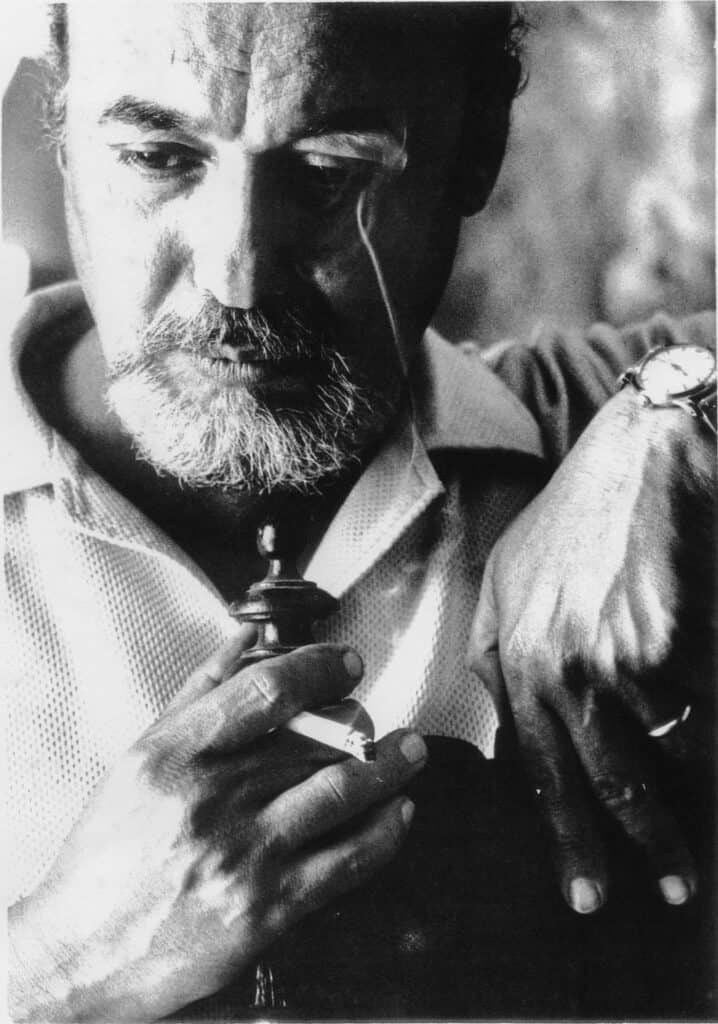 Portrait photograph of Emvin Cremona.(Courtesy of the Cremona Estate) 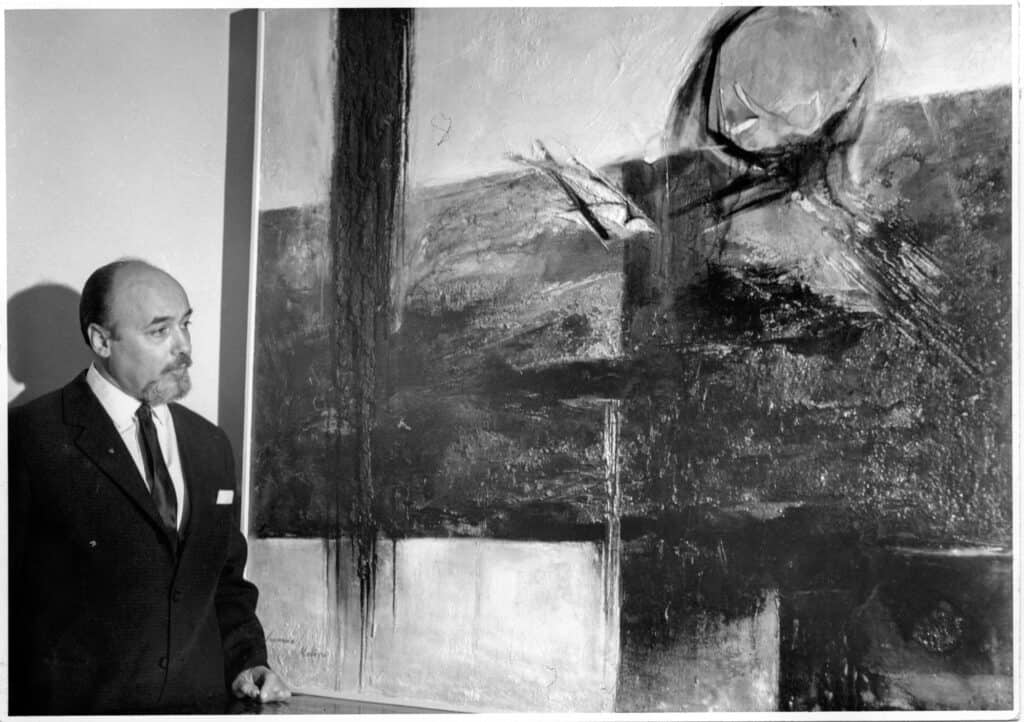 Emvin Cremona with the painting presented by the Government of Malta to the United Nations Headquarters, New York, in 1966. (Courtesy of the Cremona Estate) 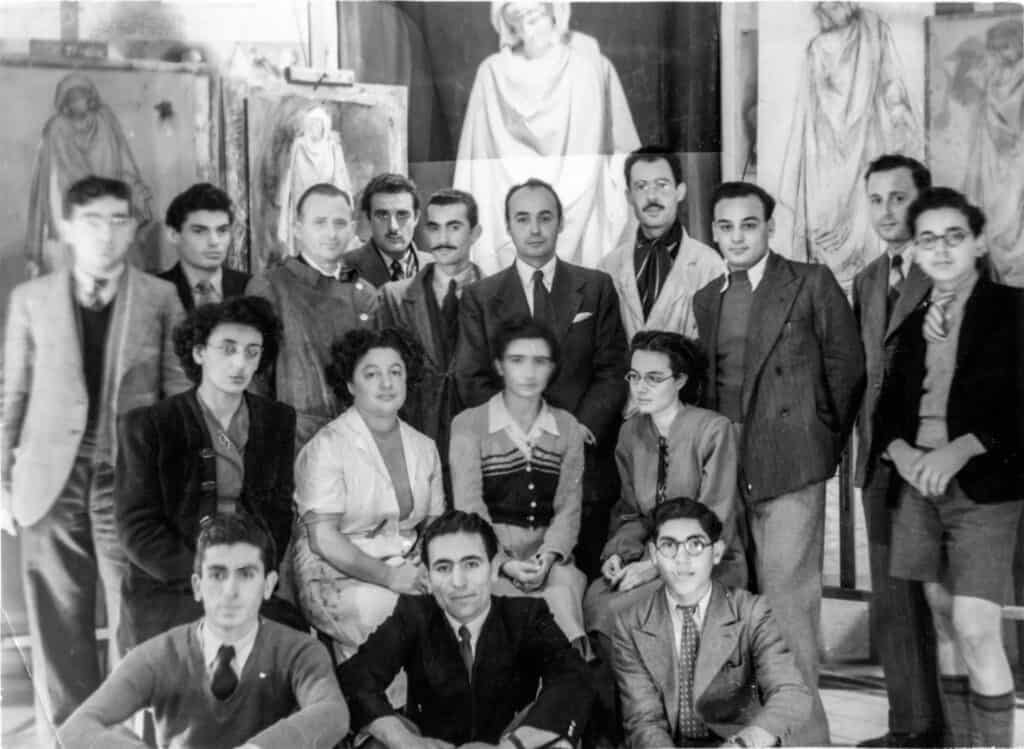 Emvin Cremona with students at the Government School of Art 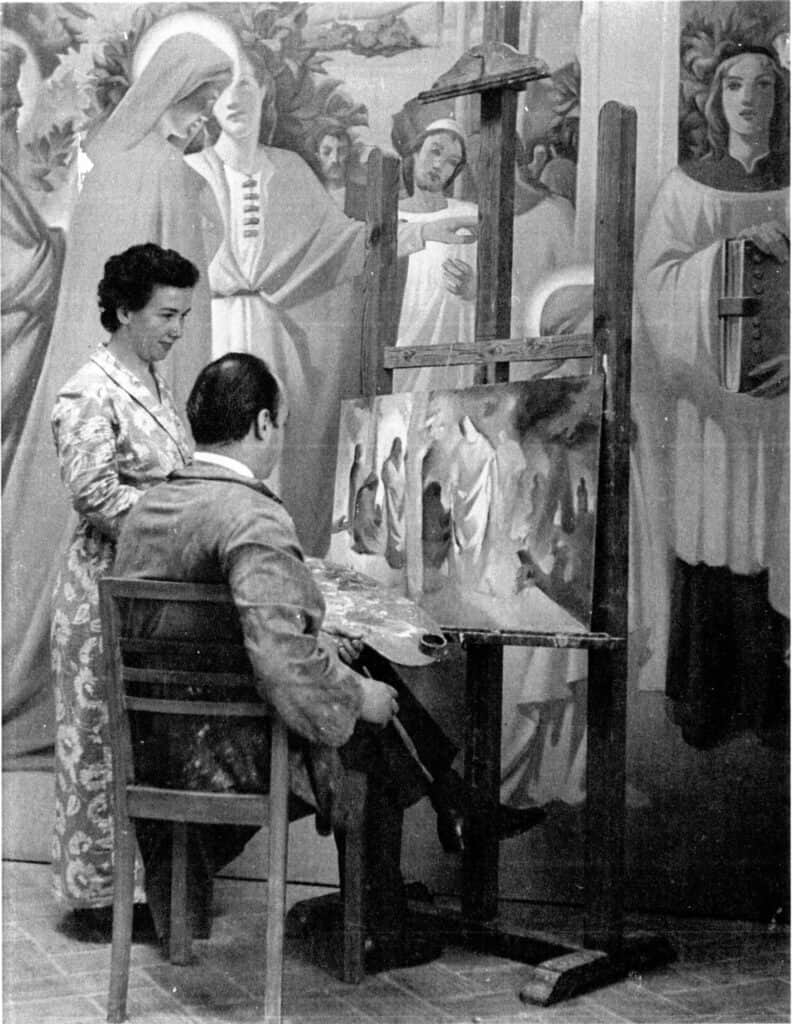 Emvin Cremona with his wife, Lilian, at the Valletta Studio.(Courtesy of the Cremona Estate) 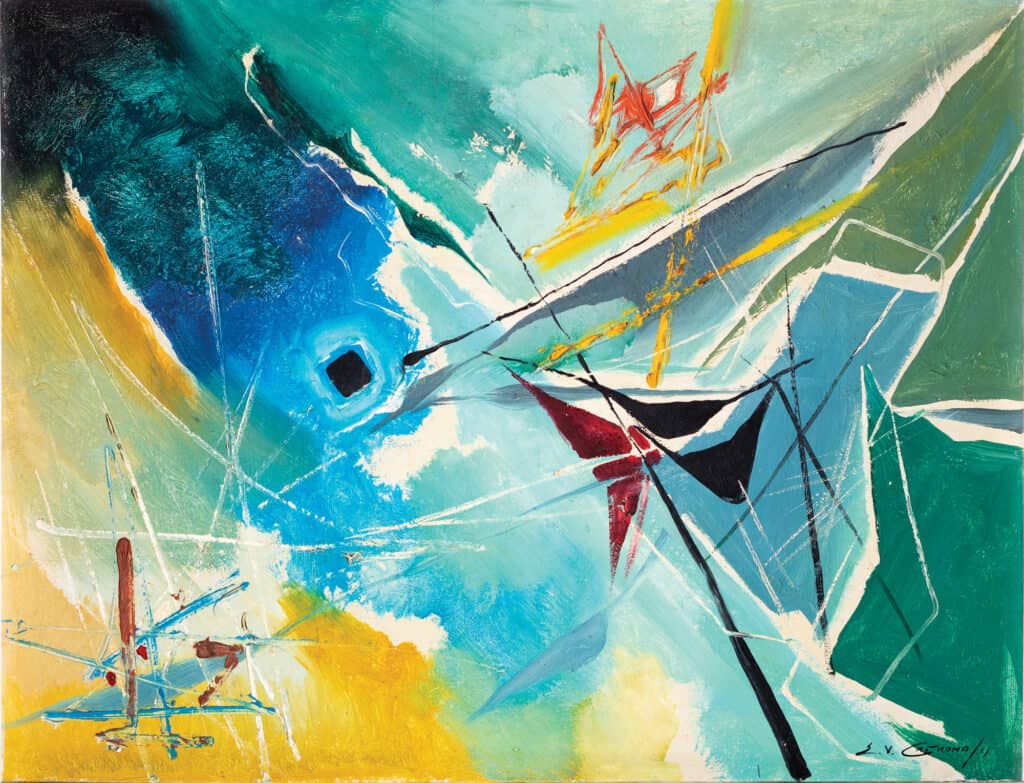 One of the abstract works (detail) by Emvin Cremona exhibited at the 29th edition of the Venice Biennale, 1958.(Courtesy of Heritage Malta – MUŻA, Valletta / Photo: Lisa Attard) 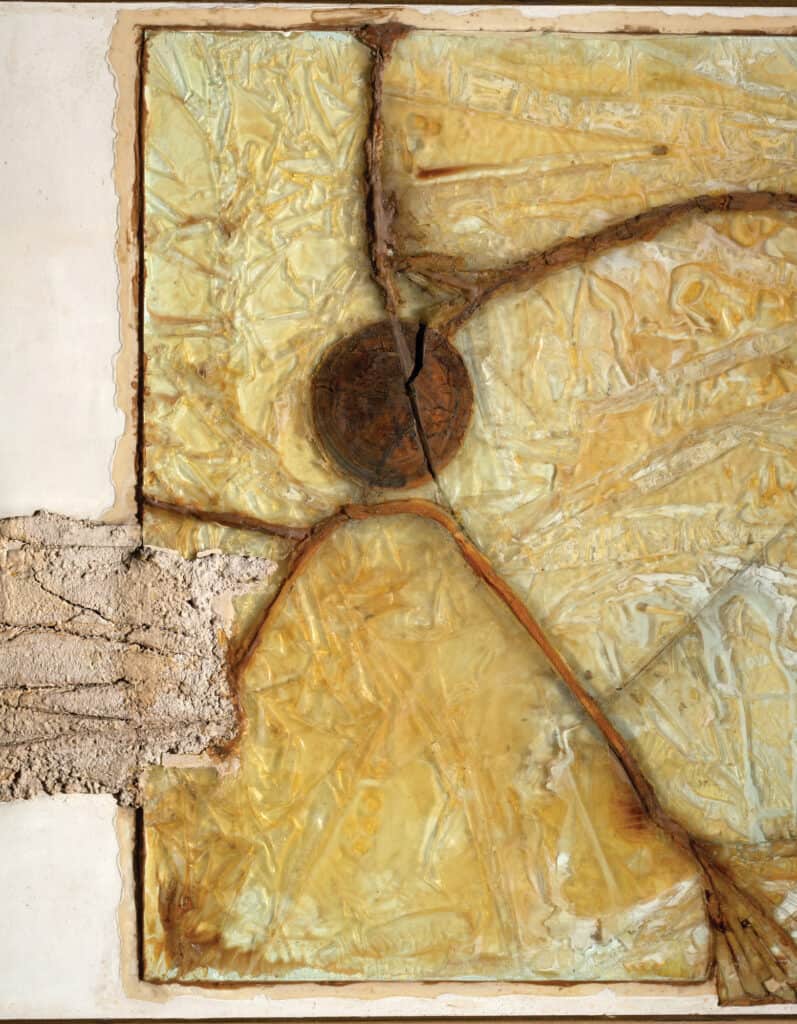